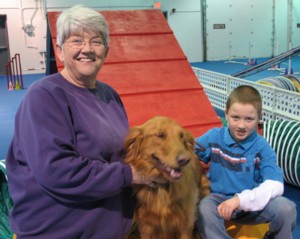 A lifelong resident of Anoka County, Diane has never lived without a dog in her life and can't imagine ever not having one by her side.  Diane's dream of someday being able to professionally train and work with all breeds of dogs came true in 1990 when she started volunteering at the local Humane Society.  In 1998, she expanded her training to agility classes.  Handlers and dogs of all ages, young or old, makes no difference.

In 1995, Diane started competing with her Aussies in obedience, Agility in 1996 and Rally obedience in 2007.  Bo and Banjo earned numerous Agility titles in AKC, NADAC, ASCA and CPE.  Currently Keeper and Diane are concentrating on CPE Agility and in 2010, Party will make her agility debut.  Diane currently works as an assistant leader with the Anoka County 4H children with their agility training, as well as guiding her grandchildren as they begin their obedience and agility training with their own dogs.
Diane's motto, "Life is a journey, enjoy it!"