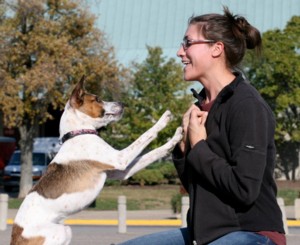 Shenna began agility as a Junior Handler over 20 years ago. Her first agility dog was the family Golden Retriever, but she soon begged her way to her own puppy and eventual long time agility partner, Banchor. Banchor took her around the US, showing and even winning in the country's largest national events. Together they earned top titles and standings within NADAC, AKC and USDAA. Most importantly, he gave her a true love of the sport of agility.

Shenna continues that love today with her two dogs Shiver (a Border Collie) and Dynamite (a Border Collie/terrier cross). Shiver and Dynamite help keep Shenna interested in the sport in new ways such exploring foundations through trick training and the challenge of running contacts. Both dogs are competing at the Masters levels.

In addition to showing (most) weekends, Shenna also teaches agility classes. She has been teaching for 15 years and especially loves puppy and foundation classes. She likes nothing better than the 'Ah-HA!' moments for a young team.